A two-hour sleep before my early departure to Massa in Italy gave me a nightmare: being pushed&pulled by a man, bodily, not getting really hurt, but tossed around to state of subtle, but constant unrest, alertness (of danger) that is never to stop – all that is  called ‘violence’ – I never knew before – until I felt it vividly in this subconscious world.

After landing in Pisa, I heard from a he-host that what I booked and paid for is actually a tent – and not a double-room bed. I felt lonely. I cancelled with despair. I lost some money. I dropped Massa …and bought a “blind destination” ticket to Lucca. It felt good…as if being finally freed from that nightmare that already started in my sleep before leaving pre-sunrise Copenhagen.

After some hours of couch-surfing search and going through charming Italian streets, I felt lonely and tired (or too old for such a lifestyle?) – as if I’ve exhausted my magic bubble – that I used to create by daring to trust the unknown (places, random encounters).

Can it be – I thought – that higher self-esteem combined with more craving for stability is actually a sabotage to experiencing life? Am I less able to open a portable door* than before when youth and confusion made me blindly play with fire?

*have you read “Kafka on the shore”? ‘Portable door’ has lived in me as a unique concept, but Murakami (via Nakata’s stone) inspired me to put words on the inexpressible…and find the Word

Now having all more figured out

Suddenly I stopped, walked left passing a gate of art – something art {art as the only saviour of ‘limbo’ situation, art the lessest evil}.

*have you heard and thought deeper about Metamodernism?

there they explain the metamodernism concept through the ‘pendulum’ metaphor. Metamodernism was “thaught” to me by my student in Sisters Academy. It was a relieving kind of revelation – after feeling quite misplaced wherever I thought deeper about postmodernism, it suddenly felt home, relevant. Metamodernism is me. Postmodernism is not (the more you get the pendulum image, he more you’ll also forgive this simplification 🙂 ).

The use of the prefix meta here derives from Plato’s metaxis, describing an oscillation and simultaneity between and beyond diametrically opposed poles. (…) 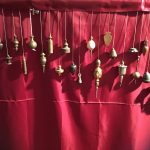 Riccardo is a collector of ancient to modern pendulums. They used to be used for construction/architecture, medicine and art. And much more, but it requires a more nerdy insight or more innocent imagination. I am really looking forward to visiting his cellar in Pisa…

These engineers/artists took me for an authentic dinner in Lucca and then on the road towards Pisa…the crooked tower is adorable I would say only in the night- enchanting street music for almost non-audience, illuminated architecture, hoses spraying sun-tired grass. That was my second – after 8 years – and most unexpected couch-surfing experience.

Spaghetti Carbonara lunch at home…over which I hear from Guido about an old special building in Pisa once upon a time squatted by artists that broke in and decided to do art there. I decide to go for a mediation event.

I enter and there’s a theatre performance by elementary school – ‘they really wanted to do it!’ – I hear. So they are welcome to do it at Theatro Rossi Aperto. I am welcome. I don’t have to pay cause it already started a half an hour ago. I am so “taken” by those sincere funny, unproffessional brilliant kids 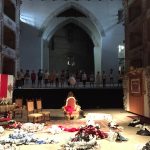 …and the context, cause the theatre space is amazing! Old, ghostly, aesthetics of abandonment and revival through rebellious souls with visions and hundreds of voluntary work.

They don’t have much, but they have abundance!

That is what – along with serendipity in Lucca, pendulums and passionate kids occupying this occupied theatre – bring me straight back on track – which I have feared I had lost.

I receive a kind reminder that:

magic is not lost with age and direction

doing things purposelessly + with no guarantees is the art of being

That busy generous man gave me and one italian a private guided tour throug the upper levels and ceilings of Theatro Rossi. I learned the theatre was soooo old. It has been closed and abandonded for more than 40 years. It was activated 6 years ago by squatters that do this amazing job and are richly ignored by local authorities of Pisa and richly recognized by regional Toscanian authorities. And by those kids… And my me and many more.

This Lucca -> Pisa experience revived me big time and reminded of:

~ abandonded places with spirit, craving to be given love and attention… then the magic happens (or portable door can open)

~ how many invisible individual and collective burning initiatives and unmeasurable treasures there exist!

The man from the “squatted” theatre said something I won’t forget: that the mission is not to have squatted Theatro Rossi. But to open Theatro Rossi (Aperto means ‘open’ in Italian).

Thank you. Tomorrow I’m leaving Pisa to go to Elba island with my mother. I can hear her calm breath falling asleep – live two meters away – that experience only happens 3 times a year. I embrace…